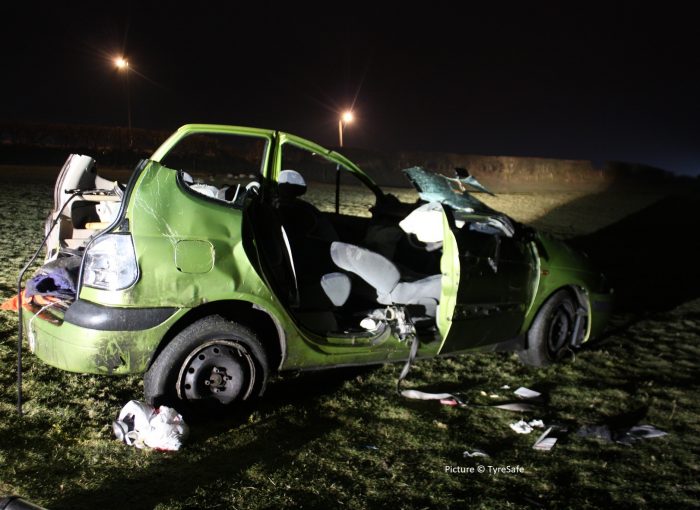 There are some very definite dos and don’ts when you have a car crash. Usually our image of a crash is like that above, which thankfully is far more dramatic than the real thing. But forget this pic of mangled metal with deployed airbags. According to the insurance industry, most of the time a car crash is a very low speed affair resulting in dents to panels, smashed lights and bruised egos.

Whether you’re to blame or not, having a crash is a high stress moment. Your heart will be pounding and you might feel seriously annoyed. Now is not the time to vent your frustration. Take a few deep breaths and try to calm yourself before getting out. If it’s your fault, be prepared for other drivers to be angry or shocked. Just remember: two angry people trying to communicate is never going to end well!

It doesn’t matter if your car is damaged or not, you must stop at the scene if you have a crash: it’s the law. If you don’t, you can be fined. If your car is still driveable, make sure you pull over somewhere safe. Turn the engine off, put the parking brake and hazard warning lights on. Then get all the occupants out of your car.

Try to remember or note down their registration number. Then report them to the police immediately.

When should you call the police?

If anyone’s injured, calling an ambulance is the priority. If you’re in a motorway layby, use one of the emergency phones rather than your mobile. That way the emergency services will be able to find you immediately.

If the road is blocked, call the police. Ring them if you think something dodgy has happened and you might be the victim of a staged ‘crash for cash’ scam. And definitely call them if you believe one of the other drivers is under the influence of drink or drugs.

Remember to call the police if…

Sadly, nowadays we live in a blame culture. If you’ve made a mistake you may wish to say sorry but try not to. Although the law doesn’t take it as an admission of guilt, another driver might use it against you and it could affect your insurance claim.

It’s all in the detail

Ensure everyone involved is in a safe place away from moving traffic. Then swap details. You should give other drivers your name, address, and car registration number. If it’s not your car, give the name of the vehicle’s owner too.

Technically speaking, you don’t have to give your insurance details unless someone has been injured. But it might make things run more smoothly with the claims process.

It’s usually wise to get other people’s insurance details just in case. You might not feel injured but with all that adrenaline in your system, you may be suffering from whiplash.

There’s a good chance everyone involved in the crash will have a different view point. And a couple of hours after the crash, you might struggle to recall exactly who did what and when.

Use your mobile phone to take photos of any damage to your car and others. If you’ve got a pen and paper, do a sketch too of where cars were at the start and finish of the accident and note the sequence of events as you remember them. Also make a note of the time of day, direction you were travelling in (you or another driver might have been blinded by the sun) and what the weather was like. Insurers will find all of this relevant.