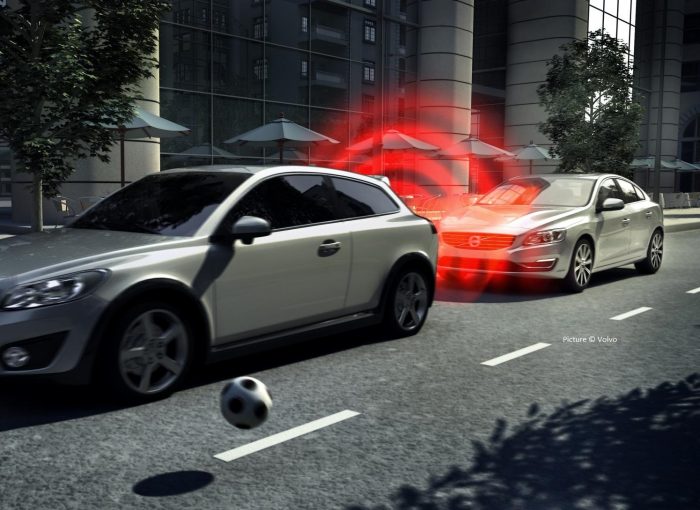 You’re right to be puzzled. The world of car safety features appears to be one comprised of acronyms such as ABS, EBA and AEB to name but a few. But these safety devices are important for two reasons. First, they could save your life if you specify them. Second, in order to benefit from the first, you need to understand what they do. Read on to find out.

What is ABS? Anti-lock Braking System

One of the older car safety features is on all cars sold since 2004. It prevents your brakes locking meaning when you stamp on the pedal you don’t have to worry about going into a dangerous skid. By preventing the wheels from locking like this it enables drivers to navigate around obstacles while still braking.

What is ACC? Adaptive Cruise Control

Cruise control maintains a set speed determined by the driver. Adaptive Cruise Control uses radar and cameras to detect traffic ahead. It then moderates the car’s speed to remain a safe distance from the vehicle in front. Once the road ahead is clear the ACC returns the car to its desired speed. This is one of the fundamentals of self-driving cars.

What is AEB? Autonomous Emergency Braking

Autonomous Emergency Braking (picture above) is designed to prevent you accidentally crashing into the back of another car. Most versions work at low speeds. More sophisticated systems work across a range of speeds. The car uses sensors to scan the road ahead for obstacles and assess the likelihood of a collision. If it doesn’t detect the driver braking, it applies the brakes itself to avoid a crash or reduce the impact speed. Experts claim it’s the most important car safety feature since the seatbelt.

What is BSM? Blind Spot Monitoring

This system acts as another pair of eyes for the driver. It watches out for undertaking or overtaking traffic and warns the driver with an audible alert and flashing light, usually in the door mirrors. Some systems even automatically make it difficult for the driver to steer out of their lane into danger.

What is EBA? Emergency Brake Assist

Drivers are frequently nervous about hitting the brakes as hard they should to get maximum stopping power. EBA assumes when you hit the pedal hard you really do want to stop and deploys maximum possible braking power.

What is ESC or ESP? Electronic Stability Control/Programme

This has different names but both do the same thing: detect when a car’s tyres are losing grip. The systems then brake the appropriate individual wheel necessary to bring everything back under control. Often, you’ll never know they’re doing their thing.

What is HUD? Head-up Display

This is taken from fighter planes and projects information into the driver’s line of sight so they don’t have to take their eyes off the road. Information typically includes vehicle speed, the local speed limit and basic instructions from the sat nav system.

Even when it’s spelt out, the name doesn’t offer any clues. It’s a universal system that anchors child car seats to the body of the vehicle. It’s the safest way to install a car seat as long as the car maker’s and seat maker’s guidelines are followed.

What is TCS? Traction Control System

This detects and prevents wheels from losing traction and spinning by cutting engine power to the wheel(s) with no grip.

This alerts the driver when tyres have lost air pressure. There are two versions of TPMS. One is very basic and according to independent tests isn’t always that accurate; the other is usually found on more expensive cars and is more reliable.