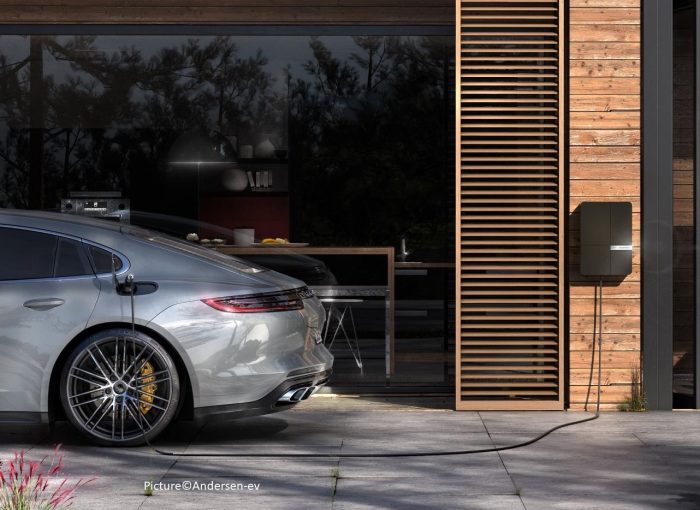 This is going to be a question drivers will ask increasingly as we approach the 2030 cut off when new combustion engine cars will no longer be sold. And there are various things to look out for when you’re investigating the best EV home charging point.

How fast do you want charging to be?

Of course the answer is as quick as possible but it’s not always that simple. Plug into a three pin plug and you’ll charge at between 2.0 and 2.3kW. That’s slow. It means a Nissan Leaf e+ (with a 60kWh battery) will take 31 hours to charge from empty.

Ideally you want the fastest EV home charging point possible. That is likely to be either 3 or 7kW. Have the latter and the Nissan will take eight and a half hours to charge.

If you are lucky enough to have a three-phase supply, you’ll be able to go for a 22kW rapid charger. But chances are, your property will have a single phase supply, limiting you to 7kW maximum.

Do you want tethered or untethered?

Tethered means like a petrol pump the charging cable is hard wired to the box fitted to the wall. It’s more convenient because whenever you get home you just unhook the cable and plug it into the car. You don’t have to fish around in the boot and connect the cable at both ends.

Untethered is better if you have multiple cars to charge with different types of cable to car interface. Yes, astonishingly, there isn’t just one fitting.

Will it be easy to install?

That depends on your property. Whichever charging point you go for, it’ll need to be professionally installed. And your house must have an up-to-date consumer unit. In addition it must have its own supply. Not all houses do; some share their supply, branching off neighbours’ houses on what’s known as a loop.

Be warned, the market is expanding rapidly and that means there are some sharp operators out there. If your installation is a tricky one, some of the bigger companies may not be interested: they’re simply looking to install as many charge points as they can for maximum profit.

Also if you’re buying a car from a dealership, remember that many manufacturers have deals with the larger charging point networks. That means they’ll push their products mercilessly, even if they may not be the best on the market or the most suitable for your car.

What to look for?

Also, consider how you’re going to use your new charger. You want a charging point that will be simple to use and ideally one that operates with a smartphone app that’s easy and intuitive. Some will even integrate with solar panels so you’re effectively charging your car for free.

Meanwhile, rivals such as Andersen major on style. They’re expensive but if you want to charge with minimalist Scandi chic, these could be the charging points for you.