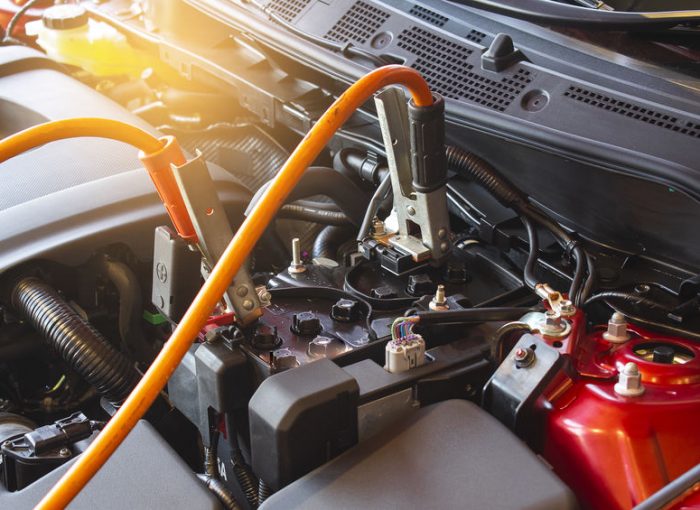 Our friends at breakdown companies tell us that the most frequent cause of breakdown is a flat battery. And the AA says it frequently gets called out by people like our reader whose battery has died while they’re cleaning their car.

Why do batteries go flat?

The simple reason for a car battery to run flat is that current is being drawn from it and it isn’t receiving any charge in return. The 12-Volt battery in a car powers everything from the headlights to the interior lights, the sound system to the sat nav. To do this, batteries must be charged on a fairly regular basis.

How are car batteries charged?

When the car’s engine runs, a small percentage of the power is diverted to a component called the alternator. This is like a generator whose job is to convert engine power to electric charge and replenish the car’s 12V battery. The alternator also helps to operate some of the motor’s electrical equipment. But the only time the alternator works is when the engine is running

Why would a battery run down during a car wash?

When a lot of people wash their car, they turn the ignition on and listen to the radio. Or perhaps they leave the doors open while vacuuming the interior. The radio and interior lights are two of the bits of equipment that draw current from the battery.

And if the vacuum cleaner is plugged into the cigarette lighter as well, that too will be drawing current. This is like asking your car to drive for hundreds of miles without replenishing its fuel tank. After a time, it’ll run out. It’s the same story with a battery: it’ll run down, assuming the car’s engine isn’t on.

Is this a sign your battery is already on the way out?

Flattening the battery by abusing it like this doesn’t necessarily mean your battery is dying. Even a brand-new battery has a finite life span if current is being drawn from it and it’s not being charged. But the older and probably weaker the battery is, the less of this kind of abuse it can take.

If your battery has been run flat, you may be able to jump start your car and go for a good drive to recharge the battery. But running it flat may have damaged the battery’s cells so that they no longer hold charge. If that’s the case you’ll have to replace it.

What to do instead?

Be mindful when you clean your car that your battery doesn’t have infinite charge unless the engine is running. We’re not suggesting you run your engine here. That’s not great for the environment and it wastes fuel too. So rather than cranking the radio up while you’re washing the exterior, why not wear earbuds/headphones instead?

Last, once you’ve cleaned your car, take it for a little drive. That will give the engine the chance to replenish the battery with any charge it might have lost.