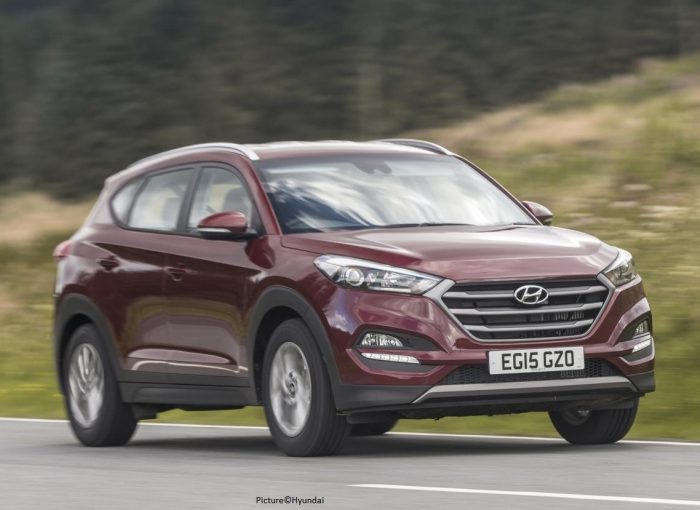 Hyundai has been making its Tucson since 2004. A small family SUV – little brother to the Santa Fe ‑ the Tucson is designed to provide comfortable family transport. Hyundai has built a strong reputation for value for money, one of the reasons why the Tucson is a big seller new. And that means there are plenty available used.

But the Hyundai is up against some strong competition, not least the Kia Sportage that it shares mechanical parts with, the Volkswagen Tiguan and Mazda CX-5.

Why the Tucson is worth looking at

The Tucson we’re looking at for our nominal £14-15,000 budget, is the third generation model. It was first launched in 2015 and comes with a choice of 1.6-litre petrol and 1.7 and 2.0-litre diesel engines. There’s also a dual clutch automatic version.

Depending on specification and mileage, for our budget, we’d be looking at a model that was registered in 2016-2018. There’s plenty of choice with the 1.6 petrol and 1.7 diesels proving the most popular.

What the used Tucson does well

Built to err on the side of comfort rather than sportiness, the Tucson offers room for a family of five, although as with most rivals such as the SEAT Ateca, that’ll be a bit of a squeeze. But passengers will find plenty of leg and head room. And the 513-litre boot is a good size too.

One of the Tucson’s real strengths is the amount of standard equipment it comes with. Even the basic S or later S Connect model features alloy wheels, Bluetooth, electric windows all round, air conditioning, DAB radio and a touchscreen sat nav. The mid-range SE (later SE Nav) adds heated front seats and rear parking sensors.

More upmarket models even come with lane-keep assist and a reversing camera. And the top of the range Premium SE has LED headlights, power tailgate and self parking. Luxurious indeed.

What the Tucson doesn’t do so well

Slip inside the Tucson and although it looks well built, you’ll be underwhelmed by a cabin that is swathed in less than premium plastics. The engines also sound pretty rough, particularly on start-up. The diesel is a particular culprit for this.

Neither is the Tucson much fun to drive. Steering feels overly assisted and vague and watch out for the ride. This can feel a bit on the firm side, crashing and banging over imperfections in the road’s surface.

Hyundais in general have a reputation for being pretty reliable. And it’s worth remembering that new models come with a five-year warranty. Buy a model from 2018 and reassuringly, it’ll still have some manufacturer warranty remaining.

Some owners have suffered clutch problems on manual cars. If you’re viewing used examples, make sure the clutch operates smoothly and that it doesn’t slip. There was a recall for cars between 2015 and 2016 to have their secondary bonnet catch reinforced. If you buy an earlier model, check it’s had this work carried out.

The Tucson is a decent contender, particularly if you don’t really care what the car drives like and you want the peace of mind of some remaining manufacturer warranty. But we think there are better options out there.