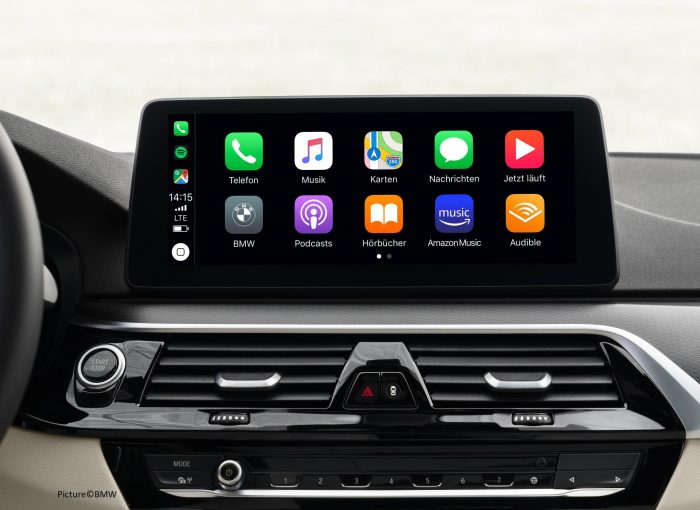 Our reader wants to know what happens if they listen to music on CarPlay and then get a phone call. Can they continue listening to Amazon Music through the car and take a phone call via ear buds?

Apple CarPlay is an increasingly useful tool that enables you to link your iPhone to the car’s infotainment system. So whatever apps you have on your phone (as long as they’re compatible) can be used on your car’s screen.

It means that rather than the car manufacturer’s possibly rather clunky navigation you can use Apple Maps or the Google equivalent.

First of all you have to make sure you can connect to Amazon Music. Although CarPlay supports it, there have been problems doing so. Our tech expert also believes you could have to have your phone wired to the car (rather than doing it via Bluetooth) but it does depend on the car and the generation of CarPlay it’s using.

The controls for Amazon Music are very similar to those for the Apple Music app. Via the Amazon Music app you can also use Alexa to change songs or switch from music to podcasts for example.

Can you listen to music on CarPlay and take a phone call?

As we’ve seen you can listen to music and make phone calls independently. In theory you can do them together too. Previously, CarPlay used to mimic solely what was on your phone. So if you were using Apple Maps and a passenger changed the music on your phone, you would lose Maps on the screen.

But with iOS13 or higher that will no longer happen. So you should be able to link your earbuds to the phone while CarPlay is also tethered and use both independently. Of course, your phone will have to be safely held in a mount. Touching a loose handheld device while driving is now worthy of six points on your licence and a £200 fine.

Is it legal to drive with earbuds in?

In the UK, you can drive with earbuds in or headphones. However, we don’t advise it and nor do driving safety experts. The reason is that it deprives you of a valuable sense that could help you to avoid having an accident.

It’s also worth remembering that the police can nick you for driving without due care and attention if they see you’re wearing earbuds or headphones and think your driving is suffering as a result.

Should you be listening to music and talking?

We might be anti-social and need more attention than most when it comes to driving but we think driving and taking a phone call is pushing the boundaries of road safety. Research has already shown that talking while driving can be a huge distraction because your brain is focusing on elements of the conversation and not on the road ahead.

We believe introducing music to the equation is a distraction too far. A bit like trying to drive while smoking a cigarette and drinking a coffee.