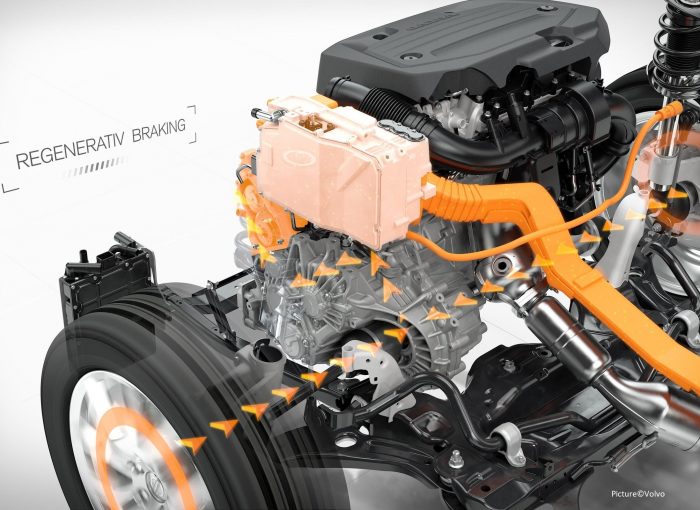 Car makers fit regenerative braking to all new electric and plug-in hybrid cars. It’s a good thing because it essentially enables us to get something for nothing while we’re driving around. Here’s how.

What is regenerative braking?

Think about how we slow cars normally. You push the brake pedal and the brake system’s pads rub against its discs, slowing the road wheels. This scrubs speed off with friction. In so doing, it reduces the kinetic energy the car is creating from its motion. This generates heat which simply dissipates into the atmosphere.

Regenerative braking takes energy that is normally lost and converts it into electricity. It then directs this into the electric or hybrid car’s battery so that it can drive the car forwards when it’s time to get going again.

When you stop accelerating in an electric car, the motor goes into reverse. As the car will still be in ‘drive’ it will continue going forwards but when the motor is in reverse it effectively acts like a generator. It harvests the kinetic energy and turns it into electrical energy. The battery then stores this.

How effective is it?

If you’re driving (without accelerating) down a steep mountain in the Alps, you’ll see a noticeable difference to your battery’s state of charge (we’ve done that). Driving around town however, you probably won’t notice much. What it does do is make the driving process less inefficient by harnessing as much energy as possible. It’s all about small gains.

It’s interesting to note that in Formula E (the racing series for electric-only cars) the teams that have had the most success, noticeably DS Automobiles, put it down to the quality of their regenerative systems. And Mazda has added regenerative braking to its regular combustion engine cars, claiming a 10% improvement in fuel efficiency.

What is a car with regenerative braking like to drive?

It depends on the car. On some pure electric cars, lift your foot off the accelerator and the regeneration system feels as if you’ve started braking. On others, you notice barely any difference.

Can regenerative braking save you money?

It’s debatable whether using these braking systems will save a great deal of money in fuel. But it does really depend on the size of the car and the type of driving you do. A large SUV that’s being driven in stop-start traffic around town will harvest more energy from braking than a much smaller car driving at a steady speed along a motorway.

Where drivers might notice financial savings is in servicing. But again, how much the savings are depends on the size of the vehicle.

Which cars have regenerative braking?

These systems became a feature when the first petrol-electric hybrid Toyota Prius was launched in the 1990s. Since then it has become a major feature of all 100% electric cars and the vast majority of hybrids and plug-in hybrids.