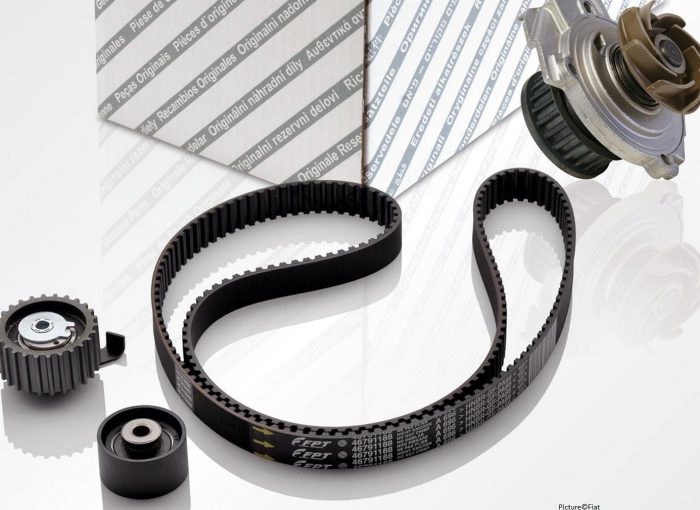 The timing belt is a vital part of the engine and you shouldn’t ignore it. One of the first things we’d advise used car buyers to do is check when the belt needs changing and whether the work has been done on their car. In fact it’s such an expensive job, we’d advise finding out about it before buying the car.

You do not want a broken timing belt. The timing belt synchronises the movement of the camshaft with the crankshaft. The belts are usually made out of tough rubber with teeth in them.

They lead a hard life and if left unchanged, can eventually snap. At the very best, an old belt might lose some of its teeth. This will cause it to slip and will throw the engine’s timing out of sequence causing a misfire.

What the timing belt does

The crankshaft is linked to the engine’s pistons. When these pump up and down, the crankshaft transforms their energy from reciprocal motion into rotational movement. It effectively transmits the engine’s power into turning the wheels.

The camshaft controls the opening and closing of the valves. These must open and close in a very precise sequence to allow the mixture of petrol and air into the cylinders to coincide with the pistons going up and down.

What happens when the timing belt breaks?

The synchronisation between the crankshaft and camshaft is vital for an engine to run smoothly. If the timing belt breaks, the link between pistons and valves is severed and the engine will effectively be trying to operate with at best sporadic injections of fuel. And that means it’ll stop. If you try to start the engine, you’ll hear the starter motor whirr but the engine won’t fire.

A broken belt is also very expensive. The valves are likely to be damaged and will require repairing. In turn that will mean the engine will have to be dismantled. Depending on the age of the car, it might make more sense to have a reconditioned engine put in or even to scrap the car altogether.

How much to replace a timing belt?

Let’s assume the belt hasn’t broken and you’re replacing it as part of a scheduled service. An independent garage quoted us around £300 for the job on a Volvo. Go to a manufacturer franchise garage and it’ll be more expensive.

When you have the work done, depending on your car, you should enquire whether it’s prudent to have a new water pump. Frequently the timing belt drives the water pump too. Ask the garage whether that’s the case with your engine.

Changing the water pump too is purely a precaution. It is subject to wear and tear as well. And the thinking is, while the engine is in pieces it makes economic sense to change the water pump at the same time.